skip to main | skip to sidebar

After Sarah left, I decided to escape impending loneliness by running off to Berlin for New Year's Eve, known in German as Silvester. (When a ticket there costs 25.50€, this isn't hard to do.) Let's just say it was well worth it. 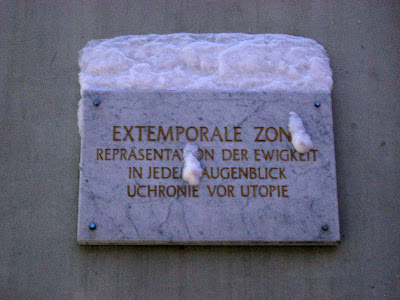 When I arrived in Berlin, it was about noon, below freezing, snowing, and New Year's Eve. After meeting a friend in the train station, I chose this opportunity to walk from Potsdamer Platz to the Bauhaus-Archiv, a mere two kilometers. The museum is pretty cool - it felt a bit full circle after my long appreciation of the band of the same name and subsequent discovery of the movement after which they'd named themselves. This plaque stands outside the entrance and reads something like, "Non-Temporal Zone: A representation of the eternity in each moment; ideal/eternal time before utopia." Awesome. 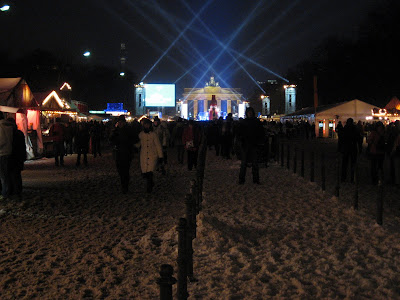 After that, I decided to walk the entire way to my friend's house near Kunsthaus Tacheles. (For the record, that's nearly six kilometers and I am probably insane.) This path was quite nice and was only enhanced by the craziness that was already brewing at 5pm in anticipation of the new year. The entire two-kilometer Straße des 17. Juni, stretching from the Siegessäule (Victory Column) to the Brandenburger Tor, was closed to automotive traffic and instead filled with slushy snow and two continual lines of street vendors. As you can see above, the party had already started, and Coca-Cola wasn't going to let that happen without stamping their ugly, gaudy face right in the middle of it. (Look closely at the Bradenburger Tor if you can't tell what I mean.) 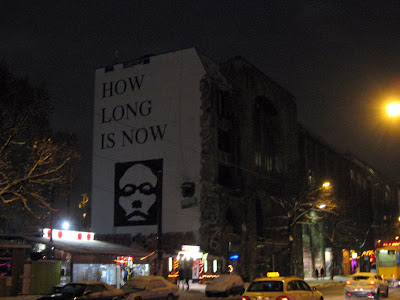 After an hour and a half I finally made it past Tacheles, which I finally took a decent picture of. (The text seems strangely reminiscent of a Smiths song. Was this intentional?) But instead of partying at the Gate or at Tacheles, me and my friends gorged on vegetarian sushi and other tasty dishes before heading to a nearby punk bar to see some live music. At midnight we stepped outside to see people launching fireworks and snowballs one after the other. Wild.

Suffice to say we stayed up pretty late and slept in pretty late, but still got up early enough to have time to head to a museum. We wanted to go to the Neues Museum (New Museum, known for its Egyptian collection) but it was already sold out for the day. We went to the Altes Museum (Old Museum, known for its Greek collection) instead, and that was cool enough. The whole Museuminsel (Museum Island) is a pretty great place to hang around, constantly busy and worthily cited as a UNESCO World Heritage Site in its entirety. 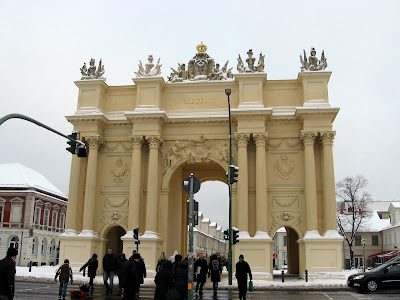 On Saturday I went to the Brandenburger Tor again... but not quite! I went to the neighboring city of Potsdam to visit another friend and he showed me around town. As if Berlin wasn't big and awesome enough, just next door is the capital of the state of Brandenburg, famous for its six ridiculously large palaces. Yeah, six. The emperors just couldn't get enough, apparently. One or two just don't cut it these days. Anyway, the public transit is cool and well-connected enough that the only-slightly-more-expensive three-zone Berlin ticket covers the entirety of Potsdam, too. Good deal. Anyway, Potsdam also has a Brandenburger Tor, pictured here. Also important: behind the gate is a vendor selling veggie dogs. I'd been waiting a long time for one of those. 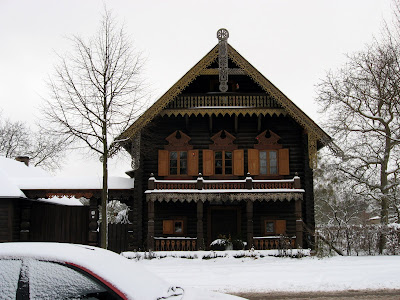 The emperors of Prussia weren't content just to have their multiple palaces in their home away from home (Berlin was the actual capital, but they chose Potsdam as their city of residence); they also wanted a cultural paradise. Therefore, they built miniature versions of selected world cultures. Most notable are the Dutch Quarter and the Russian Colony (pictured here), although strange things like an ice cellar shaped like a pyramid can also be found. It makes for a cool environment, albeit so very weird. 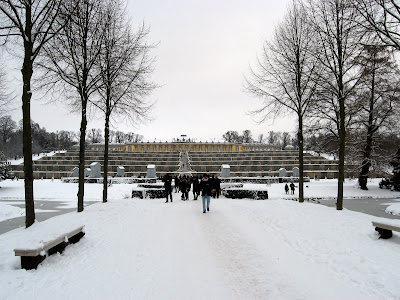 First we have Schloss Sanssouci. ("Schloss" means "Palace" and "Sanssouci" is apparently French for "without worries".) This isn't a great picture, but you get the idea that it's big and grandiose. About half of the area of Potsdam is actually just parks, the biggest of which is this one, Park Sanssouci. 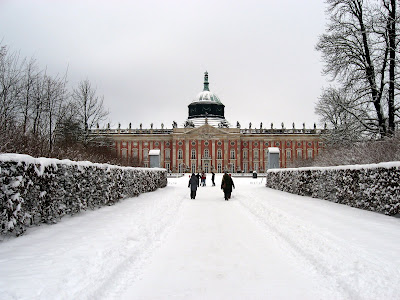 Like I said, one wasn't enough, so the even-larger Neues Palais (New Palace) is just down the way. There are also two smaller but equally extravagent buildings behind this one, one of which belongs to the university. Studying in a former palace would be pretty cool. (Note that the university in Hannover primarily resides in the former Welfenschloss, too, although I'm at the Fachhochschule, not the actual Uni.) 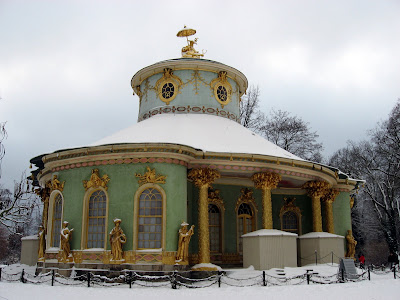 Keeping in line with artificially bringing other cultures to Potsdam, this Chinese Teahouse lies near the center of the park. It's incredibly beautiful and an annoying speaker system will yell at you if you get too close. 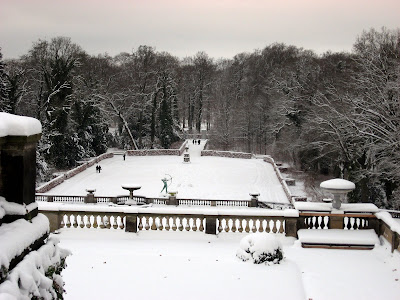 I didn't even get to Schloss Charlottenhof, but I did go to the Orangerieschloss, from which I took this picture. There are several other buildings in the area, including another Chinese-influence Dragon House, a Belvedere, and in other corners of the park, a big obelisk, Roman baths, and so on and so on. It just keeps going. 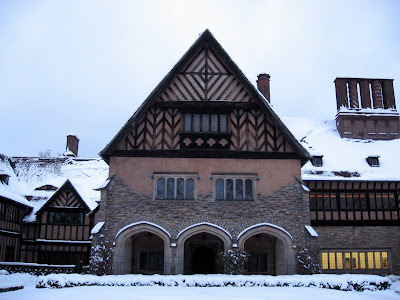 Of course, Sanssouci is just one park. The other main one is the Neuer Garten (New Garden), most famous for Schloss Cicilienhof, where the Potsdam Conference took place in 1945. Check out the chimney on the right, in which each of the five stacks is designed in a different style. 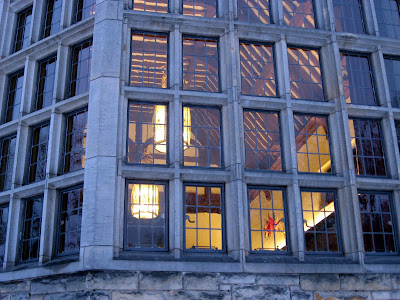 Looking in from the back of the palace. This is where the conference took place; note the flags. 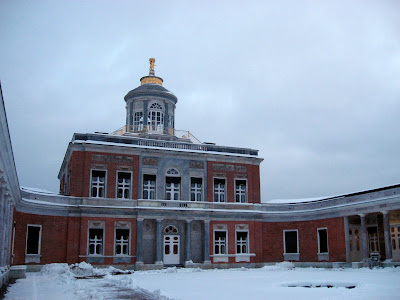 Major palace number six: the Marmorschloss (Marble Palace). In this park there are also countless other little treasures, like the aforementioned pyramid, a Gothic library (which seemed impossibly small to be suitable for that title), and a nice little slope for sledding. Actually, plenty of people were sledding down the side of the Schloss Sanssouci, which was kind of great. The neighboring Heiliger See (Holy Lake) also provides some nice views.

If Berlin is the most culturally intense place in Germany, Potsdam is the most architecturally astounding. For a city that really isn't all that big, it has more incredible parks and palaces that any other place I've heard of (except Versailles, which I haven't seen), at least on a per capita basis. Well worth the short trip outside Berlin.
Posted by Patrick at 5:25 AM

My name is Patrick Vacek (also known as The Nowhere Man) and I was a participant of the 26th Congress-Bundestag Youth Exchange for Youth Professionals (known as the Parlementarisches Patenschafts-Programm in Germany) in 2009-2010. Through the program I spent a year in Germany: I first spent two months studying at a language school in Köln (Cologne); then I studied for a semester at the Fachhochschule Hannover, and then I worked as an intern in the cryptography department at Deutsche Bank in Frankfurt am Main.