skip to main | skip to sidebar

Back to Berlin for the Fall of the Wall

Today marks twenty years to the day since the fall of the Berlin Wall. There's a big event going on at the Brandenburg Gate today, and several special exhibits up around Berlin. Therefore, several members of my exchange program decided to head up for a little mini-reunion. I figured I'd head over as well, although to avoid missing too much class I came back yesterday. 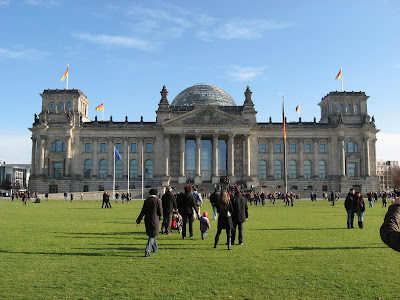 I showed up at the central train station and just started walking. It's been well over five years since I was last in Berlin, and it felt incredible to be back. Seeing the Bundestag and Brandenburg Gate made me so happy. Around the Gate was a big display of pictures of the old wall, and a big stage was under construction. Seeing so many people and so much activity focused on recent history was a great feeling. I walked along Unter den Linden and kept going until I got to Alexanderplatz; I ended up walking the whole way to my friend's apartment because the weather was nice and the city is just incredible (even if it was awfully cold). 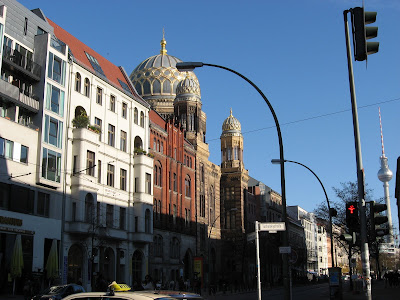 A few streets away from my friend's place, I noticed some police officers standing between a gate and a fancy building along the block. I looked up and saw the Neue Synagoge (New Synagogue), a beautiful building built in 1866, burned on Kristallnacht in 1938, bombed out in 1943, and rebuilt after the war.

After meeting up with my friend, who was lucky enough to be placed in the middle of Berlin, I went to the Gedenkstätte Berlin-Hohenschönhausen, a former Stasi detention center. Our tour guide was a Cuban who was detained there for eight days in 1987 after the Americans tapped his phone. (I was born in 1987... that's a scary thought.) For the first ten or fifteen years after the war, the Stasi used an underground bunker and tortured their victims there, but from about 1960 until 1990, they used a newer building, which still was far from comfortable and in which the captives were still treated as subhuman. Creepy place. Apparently the former head of the facility still lives in the area and walks his dog past the place. Unbelievable.

I spent the rest of the day meeting up with other current American participants, former German participants, and a couple South American friends I'd made at the language school in Köln who moved to Berlin in the meantime. It was a fun time. 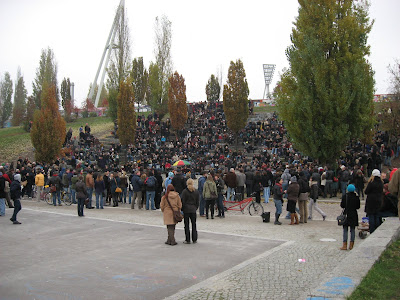 Sunday I spent most of the day at the Mauerpark. On Sundays, there's a huge flea market there, of course with plenty of awesome street food. The "bread pakoras" was the best, but also good was what was labeled as a "tortilla" but was really a baked blend of cornmeal and veggies on a slice of dark German bread with some tomato sauce. Even crazier than the food was the karaoke party between the flea market and the nearby basketball courts, right next to a still-standing part of the Wall. For some reason, there's a random sort of ampitheater built in the hill, and Sunday afternoons a guy with a karaoke system shows up and lets people come and sing. As you can see above, even when it's near-freezing, around 500 people still come to watch. Awesome. 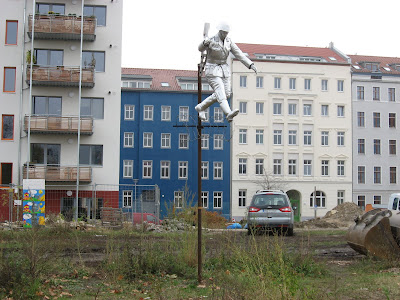 I spotted this guy on the way to the Mauerpark. I'm not sure what his story is, but he is standing where the Wall used to stand (and another still-standing part is just a block away).

[Edit 2009.11.23: I have since learned the story here. This sculpture depicts Conrad Schumann, an East German soldier, defecting by jumping over the early foundations of the wall. The sculpture is called Mauerspringer (Wall Jumper) and it's based on a famous photo by Peter Leibing. Thanks to Danny for the heads-up.]

So that was Berlin. I wasn't actually there for long, but I had a fantastic time and I already want to go back. Typical. Hannover has still been treating me alright; it's no Berlin but there's the occasional special thing to see or do, like going to a Spencer Davis Group concert for free. Here's some other recent finds: 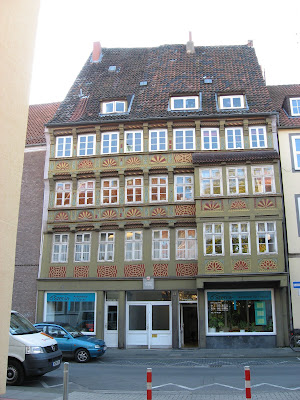 The oldest house in Hannover, from 1566! 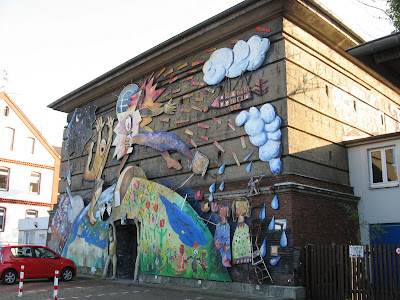 One day I (intentionally) didn't get off at my tram stop and continued all the way to the end of the line. While walking back home, I found this just a few blocks away from my house. 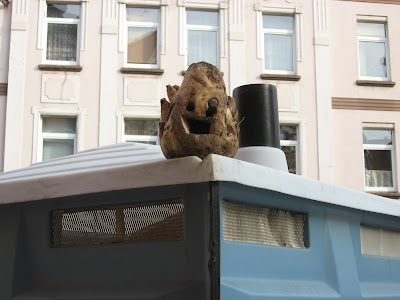 Last weekend there was a record show in my part of town, so I walked down some of the sidesteets to get to the place. I'm glad I did, not just because I found some good bakeries, but also because I found this little guy sitting on top of a public toilet. Who knows. But the record show was great!
Posted by Patrick at 10:33 AM

My name is Patrick Vacek (also known as The Nowhere Man) and I was a participant of the 26th Congress-Bundestag Youth Exchange for Youth Professionals (known as the Parlementarisches Patenschafts-Programm in Germany) in 2009-2010. Through the program I spent a year in Germany: I first spent two months studying at a language school in Köln (Cologne); then I studied for a semester at the Fachhochschule Hannover, and then I worked as an intern in the cryptography department at Deutsche Bank in Frankfurt am Main.